How many times have you heard someone say, “Oh I could never go vegan/ plant based  because I can’t give up _______!” Insert cheese, ice cream, bacon, etc…

I’ve heard that a lot. Mainly cheese and bacon as the two deal-breakers. While I’ve thoroughly addressed the issue of vegan ice cream in the past by using frozen bananas, I’ve never really come across an easy to make something similar to bacon. I use tempeh bacon occasionally but it is definitely a treat and not something I buy regularly. I’ve made eggplant bacon in the past but not everybody loves eggplant and you do need a mandolin in order to achieve maximum crispiness.

I have made this about a dozen times in the past month and it’s been eaten to quickly for me to properly photograph. I finally captured it today so here it is, in all it’s elusive glory.

This is really easy to make! I promise. Try it.

Here I paired some mushroom bacon with some butternut squash mac & cheese. The flavors go great together. 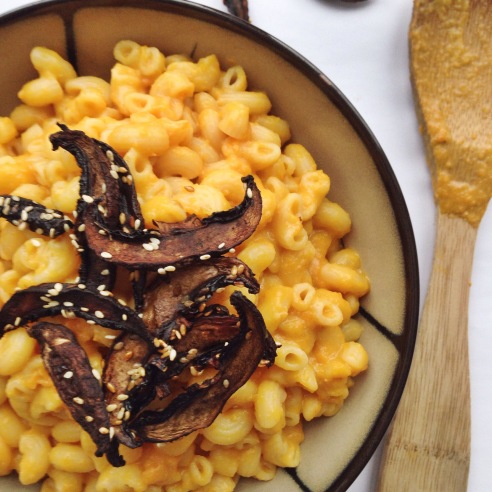 My 6 year old daughter trotted into the kitchen while I was taking these out of the oven one day and asked me, “what is that?”, and I replied “bacon” not really thinking to tell her that it was mushrooms out of curiosity to whether or not she would comment on the fact that it clearly was not bacon. She happily ate it without question and with much praise.

I don’t loooove the idea of mock meats because I don’t like the idea of trying to replicate the meat itself.  Instead, I like to create flavors and smells that remind me of the flavors and smells of those things I used to cook. Mushroom bacon is not an exact replica of bacon. Banana ice cream is not an exact replica of dairy ice cream. These are simply things to satisfy those flavor/texture profiles.

I’ve been a very busy bee in my house lately. Most likely having to do with the fact that it’s just been bitterly cold for the past few weeks and it leaves me with few chances to get outside. I’ve definitely gone for a few stretches of 3-4 days without leaving the house, with the exception of walking the dogs up and down my driveway (which is about 1/4 mile long).

It is a welcomed change from the fast pace of the spring/summer/fall months, I have to say. Winter gives you the chance to catch up on rest, cleaning, rearranging, meditating, movie watching, crafting….etc….it’s been enjoyable.

But I am ready for spring…!! Can’t hide that. I was checking out the display of heirloom carrot and tomato seeds the other day at the co-op.

1/4 inch thick is perfect. The thinner the better, as it will let the mushrooms crisp up quicker. Try to keep them all the same size so they cook evenly.

Put your mushrooms in a large mixing bowl.

Drizzle oil over the mushrooms, 1 teaspoon of tamari or soy sauce, the vinegar  and 1/2 a teaspoon of maple syrup or sugar.

Sprinkle 2 teaspoons of sesame seeds over the mushrooms.

Toss everything gently with your hands to coat.

Lay your mushrooms flat on the baking tray taking care not to let them overlap. They can be as close as possible because they will shrink up rapidly but just don’t let them overlap or they will get stuck together.

Bake the mushrooms for 20-30 minutes or until crispy. Check occasionally so as not to let them burn. I baked these at 300 degrees so that it would be harder for them to burn; you could do it at a lower temp for a longer time or even try doing it at a higher temp for a shorter time. Whatever you do, make sure you check on them! Mushrooms brown quickly if left under a high heat.