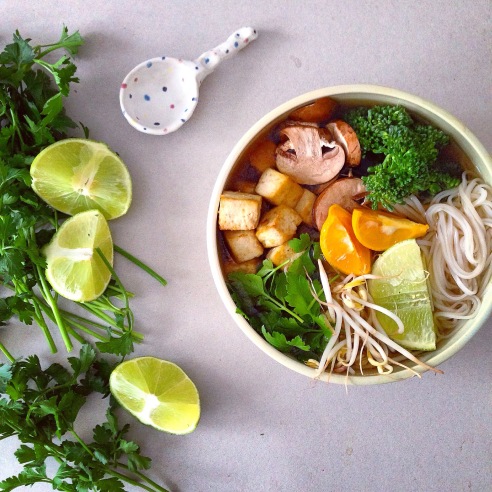 I get emails from Food52 every once in a while and I’m rarely disappointed. This week it was all about vegetarian pho. Pho, pronounced “fuh”, is a Vietnamese soup notably having a rich, sumptuous broth, fresh herbs, vegetables, noodles and some kind of protein.

It is a recipe, as they stated, that once you know how to make it, you’ll make it often because you won’t need a recipe anymore. 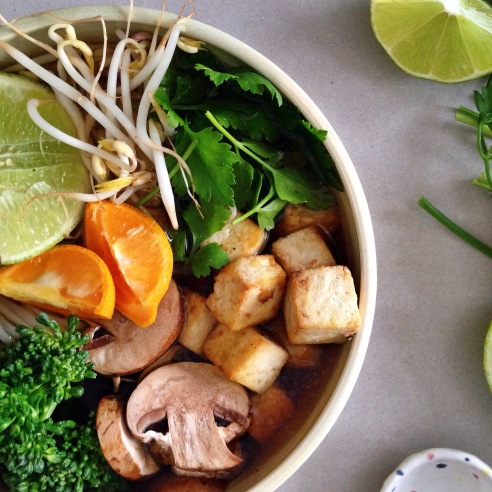 I started by broiling an onion and a large piece of ginger until they were charred – about 20 minutes.

The preferred way of getting the char would be on a gas stove but I only use my gas stove (outside) in the warmer months.

Then, I added the onion and ginger along with a stalk of lemongrass to a pot with 6 cups of water.

I added my spices and a pinch of salt to the broth pot.

Brought it to a gentle boil and then reduced it to low heat.

Simmered for an hour with the cover on.

While the broth is steeping, prepare your veggies, noodles, etc… 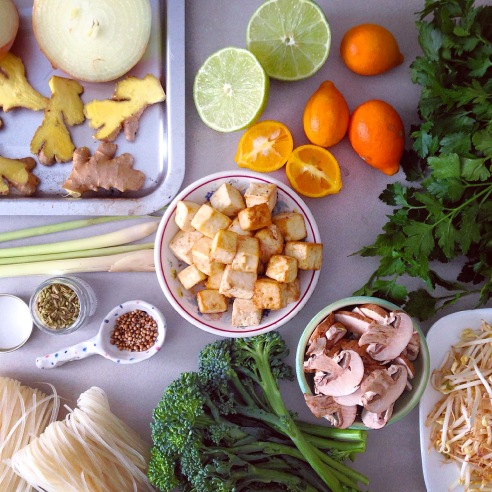 I cubed some firm tofu, tossed it with olive oil, soy sauce and minced ginger and baked it at 400 degrees F for 25 minutes or until golden.

I chopped some broccolini.

Cut a lime and some mandarinquats; a cute little citrus I found at the co-op while I was looking through the limes.

Put some rice noodles in hot water and let them sit for a few minutes to soften (make sure they don’t turn to mush! – just a few minutes is usually all they need. Taste them if you’re unsure.)

After about an hour I tasted my broth. Um, WOW. Taste buds blown away. It definitely needed some salt but the flavors developed into something really fierce in just an hour. If the flavors aren’t strong enough, simmer a bit more. On the other hand if they’re too strong just add some water to dilute it.

Strain your broth with a fine mesh strainer. Pour it into a big glass jar or another pot.

I portioned off some noodles, raw broccolini, bean sprouts, tofu, mushrooms and parsley into two bowls and ladled the broth over it all. The smell was killing me by now and I drank a few gulps of broth out of the jar…

I added soy sauce for saltiness; 1-2 tablespoons per bowl.

I squeezed a wedge of lime and one mandarinquat in my soup as well.

As with everything, you must taste and adjust to your liking.

Thank you to food52 for always inspiring me and providing me with a plethora of interesting kitchen tools and housewares to ponder over.